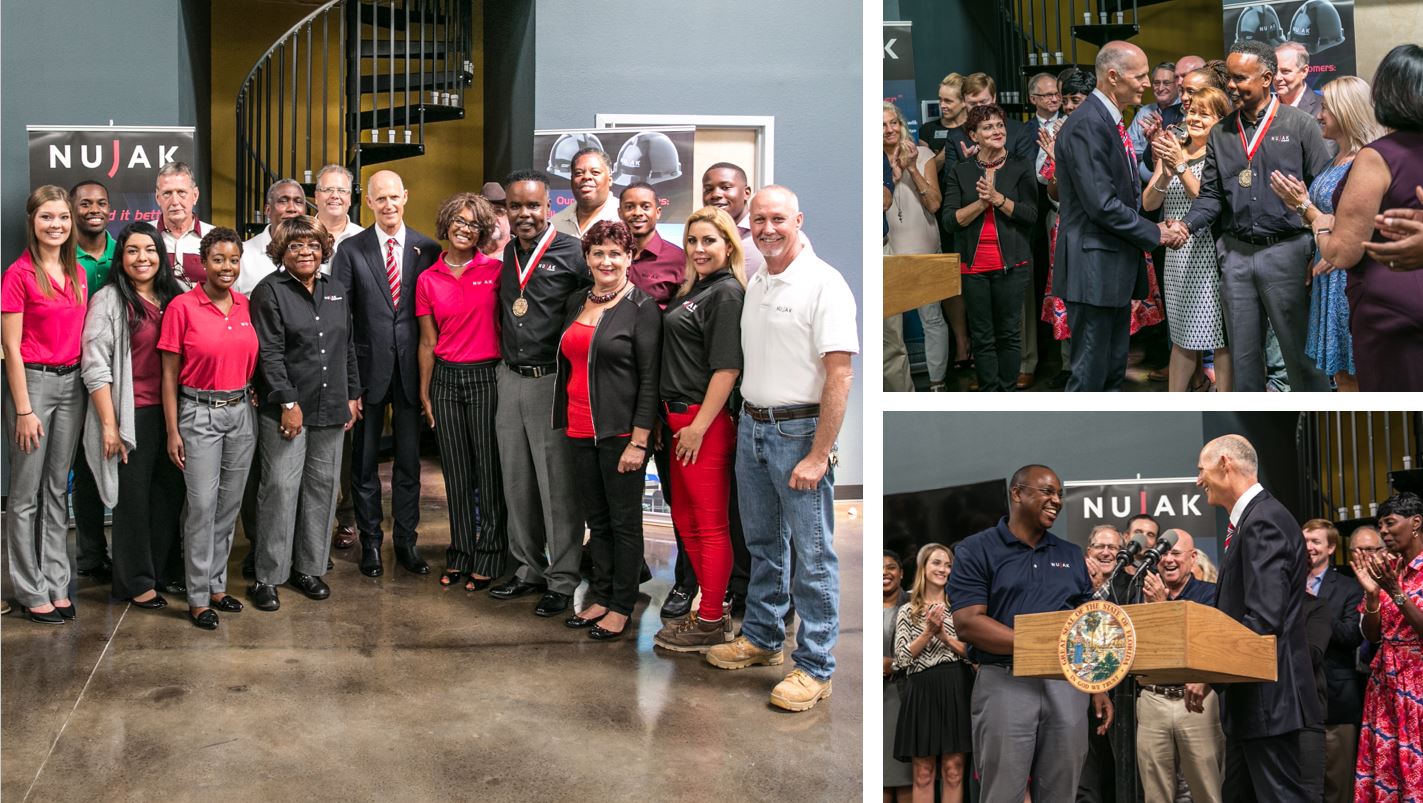 Lakeland, FL – Governor Rick Scott held a press conference yesterday at NuJak Companies to recognize the firm for its contributions to job growth and economic development.  NuJak Companies, founded in Lakeland in 1992, is one of the leading full-service construction companies in the state of Florida, specializing in providing preconstruction, construction management, design-build, and general contracting services to a variety of clients.

During the 20-minute press conference, Governor Scott awarded Frank Kendrick, President/CEO of NuJak Companies, the Business Ambassador Award.  Governor Scott also took the time to recognize Clifford L. Moore Jr., Vice President of NuJak’s South Florida market, with a special employee recognition for his rise up the ranks in the firm during his five years with the company.

Included in the audience, most of whom formed a backdrop behind the speakers, included Florida legislators Neil Combee, Colleen Burton and Sam Killebrew.

Governor Scott said, “It was great to visit NuJak Companies today to highlight their continued success and job growth. Florida’s small businesses like NuJak Companies are an integral part of our thriving economy, and we have fought to support them by cutting taxes and reducing burdensome regulations. Last week, I announced that we doubled our promise to create 700,000 jobs in seven years by creating 1.4 million jobs since December 2010, and we will keep fighting to continue this incredible economic growth. With the new $85 million Florida Job Growth Grant Fund to invest in infrastructure and workforce training, our state will continue to add opportunities for families across Florida.”

NuJak Companies President and CEO Frank Kendrick said, “We are very excited to have Governor Rick Scott visiting our office today to recognize NuJak for its contributions to job creation and economic development.  Governor Scott is a major advocate behind the power small businesses have in stimulating jobs and economic growth, and we are one of the companies that has benefited from his pro-business approach. Since Governor Scott took office in 2011, NuJak Companies has experienced approximately 700% growth.”

Florida Commissioner of Agriculture Adam Putnam said, “Florida continues to lead the nation in job growth thanks to innovative businesses, such as NuJak, and Governor Scott’s unwavering leadership to support economic growth in the Sunshine State. I applaud Frank Kendrick not only for creating jobs for Floridians, but also for being a great corporate citizen who gives back to our communities.”

Once the press conference ended, Governor Scott took the time to take photos with guests and all of the NuJak staff.  Photos of the event can be found here.