Lakeland, FL – NuJak Development, Inc. has been ranked No. 3 on the Tampa Bay Business Journal’s 2016 Fast 50 List, of the 50 fastest growing companies in the Tampa Bay area.

NuJak is a full-service construction company headquartered in Lakeland, FL and has been serving Central and South Florida for over 24 years.  Most notably, NuJak is known for being only one of two construction firms in Florida to be chosen to build the iconic $107 Million Innovation, Science, and Technology (IST) building for Florida Polytechnic University, completed in September 2014.  Since then, NuJak has also partnered with Southeastern University, the fastest growing private Christian university in the country on a $60 Million capital expansion program.

Frank Kendrick, President/CEO of NuJak stated, “I’m really excited to be on the Fast 50 List because I believe it’s a harbinger of things to come.  The last time we graced the stage of Fast 50 was in 2007, and right after that the economy tanked, but right now, looking over the horizon, the economy appears to be in full swing and it just signals to me that it’s a full recovery and I really believe the best is yet to come.”

The Tampa Bay Business Journal’s Fast 50 Awards Luncheon was held on Thursday, July 21, 2016 at the TPepin Hospitality Center in Tampa, FL.  Fifty companies from across the Tampa Bay region gathered at the event to network and find out their rankings on this year’s list.  Companies were ranked by revenue growth from 2013-2015, and in order to qualify, had to be locally-headquartered, privately-held, and have three years of consecutive growth with a minimum of $1 million in 2013 or $5 million in 2015. 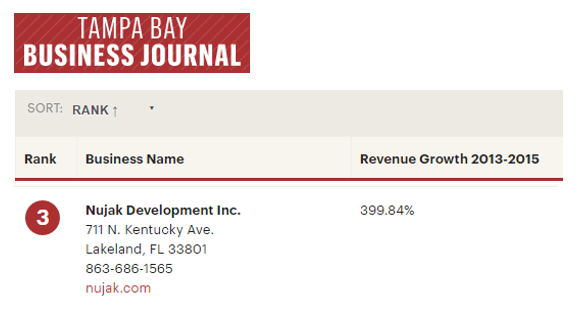 Frank Kendrick ended with, “I remember this TV show as a kid, the $6 Million Dollar Man, with Steve Austin and in the intro, it would say something to the effect of, “We have the capability to build the world’s first bionic man better, stronger, and faster, and I believe that God has given us that same capability –  to build a company that is better, stronger, and faster…and it’s exciting.  My dad once told me, Son – when you find a formula that works, work the formula.  And I believe that we have found a formula that works.”

NuJak Companies, Inc. is one of the leading full-service, minority-certified, construction companies in the state of Florida. With offices in North, Central, and South Florida, the company specializes in providing pre-construction, construction management, and design-build services to clients in the Government, K-12 & Higher Education, Healthcare, Religious, Industrial/Warehouse, and Commercial/Retail industries.